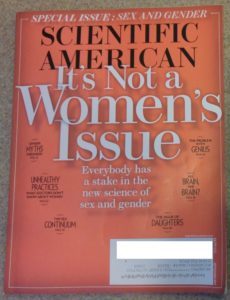 A couple months ago, a fellow romance author posted a funny comic about motherhood on her Facebook page. She included words to go along with it to this effect: “This comic about the frustrations of being a mother is hilarious! I had to skip over the feminist stuff tho, cuz men and women are biologically different and there’s no getting around that, but if you ignore that stuff then it’s so true!”

I was gobsmacked that a fellow romance author, of all people, could forsake feminism as a lie women tell themselves in order to deny nature’s truth. Then James Damore, aka “Google Bro,” released his “Women Are Biologically Inferior” manifesto and it got me wondering: setting aside the loaded question of whether women are inferior to men in general, how biologically different are men and women to begin with, and how do those differences affect our behavior?

Romance is filled with tropes that assume certain stereotypes about how men and women should act, from the virginal, chaste heroine (who is pure and beautiful and therefore worthy of love) to the aggressive, alpha male hero (who is brave and strong and therefore worthy of love). Of course we recognize these tropes as fantasies with only a passing resemblance to reality, but the aforementioned author’s Facebook comment suggests there are a significant number of romance readers and authors—maybe even a majority—who believe these tropes are based on real-life hardwired differences between the sexes.

But if you’re going to make a claim supposedly based on science—hence the term “biologically” rather than “according to the MRA subreddit I frequent”—what does actual scientific literature have to say about it?

Well, I happen to be a big-time science nerd. I have college degrees in technical fields (engineering and physics) and subscribe to lots of scientific journals and blogs where articles about this topic sometimes pop up. In fact, this month’s issue of Scientific American just happens to be all about gender—how convenient! As any good scientist will tell you, no complicated issue is ever black or white, especially when it comes to human behavior. You’ll find “evidence” for any crazy-ass thing you want to believe if you fish around long enough. But if you’re a critical thinker, open to having your beliefs contradicted by reality, and then changing your beliefs as a result (which is a lot harder than it sounds—cognitive bias is very powerful), you look at the preponderance of evidence and come to an educated conclusion about what is probably true.

(Note that in this case “truth” = reality, not “my own truth,” which is psyching yourself into believing bullshit.)

So are women and men biologically different in ways which affect our behavior and validate the tropes?

TLDR Answer: No. Gender-specific behavior is based on cultural standards, not biology.

(Get ready for some citations!)

The “biology made me do it” line of thinking comes from the assumption that you can observe an animal’s behavior and directly extrapolate a reason for it based on the animal’s biology. For instance, if you’ve read a science book or two you may assume people love babies because animals are hardwired to take special care of their offspring to maximize the survival of their species. However, there are clearly people who don’t like kids or babies, and many parents who don’t love their children. This is because humans aren’t normal animals, and our reasons for doing things are more complicated than a cursory reading of biology and psychology can explain. The key difference between us and the rest of the animal kingdom is that our prehistoric biological hardwiring is easily overridden by cultural forces.

Take another example: racism. It’s tempting to strike a superficially objective pose and say that racism is “natural” as a product of our innate dislike for anything that is not like us, in order to protect our genes (it all comes down to survival of the species, right?) [1]. However, this explanation ignores the fact that humans have extremely low genetic diversity. Every human being on the planet shares about 99.9 percent of their DNA with every other human [2]. In fact, two separate chimpanzee populations (our closest non-human relatives) living in geographic proximity to one another are still more genetically diverse than the entire human race [3]. We are basically clones of one another, and yet we seize on differences that are literally skin deep in order to justify one cultural population’s “superiority”—and therefore right to hold power—over another. While our dislike of things and people that are different may have been a hardwired instinct we acted on millions of years ago, we’ve since coopted this hardwiring for purely cultural reasons; the biological differences between races, which white nationalists often cite, do not actually exist.

This distinction is what tripped up the Facebook author and Google Bro: you can’t make generalizations about human behavior based on our biology because cultural forces trump nearly everything. If you’re going to make the case that gender-specific biology accounts for behavioral differences between men and women, you first need to prove that the null hypothesis is false—that the differences are not due to something else, like cultural factors.

It’s easy to look at the male and female body and assume that we are completely different (hotdogs vs tacos! Heaving bosoms vs washboard abs! Flowing locks vs flowing mullets!), and that these differences extend to our brains as well. It’s also easy to look at sex differences in the animal kingdom and assume that the clear differences in male and female behaviors within many species also extend to humans. But gender research doesn’t support this assumption. There is no such thing as a “male” and “female” brain [4]. To the extent which the brain controls sex traits, such as the amount of testosterone or estrogen produced, they vary wildly between individuals [5]. Everybody’s brain is made up of a mosaic of male and female traits which can’t be mapped back to a specific gender demographic [6]. Put another way—if you asked a neurosurgeon to map your brain simply based on your gender, they wouldn’t be able to do it. There is no universal brain structure which makes somebody with two X-chromosomes naturally “neurotic,” “emotional,” or “indecisive,” just as having a Y-chromosome doesn’t mean you’re naturally “assertive,” “aggressive,” or “brave.”

There are, of course, biological factors that do affect a person’s behavior, such as sexual preference (I always find it amusing when someone refers to homosexuality as a lifestyle choice, as if being vilified and alienated by large swaths of society is a fun choice). Mental illness such as psychopathy, schizophrenia, or bipolar disorder will also affect a person’s behavior. But these biological factors affect people on an individual basis, not whole demographics. The stereotypical differences between male and female behavior disappear when environmental circumstances change. For instance, the “sexual revolution,” which marked a significant uptick in single women’s sexual activity, coincided not with the introduction of the birth control pill—a biological factor—but with the women’s liberation movement—a cultural shift (the pill had been available since the early 1960s, while the sexual revolution took off in the late 1960s and early 1970s) [7]. The belief that women are hardwired to prefer monogamy while men want to spread their seed around ignores the fact that both genders report similar sexual habits and generally prefer monogamy in equal measure [8]. There’s also no difference in men and women’s appetite for risk, despite the “men take more risks to attract females” stereotype [9].

So why are women considered inferior to men in a wide majority of cultures if it isn’t nature’s truth? One clue to the rise of the patriarchy comes from the Bronze Age in human history, when countries started establishing themselves on the backs of their armies. During the Warring States Period of Chinese history, samples of ancient human remains showed a significant drop in female nutrition from previous historical periods, likely the result of resources being diverted to males who could fight for their country/warlord [10]. Societies took advantage of the physical differences between men and women to achieve cultural objectives, and the “men are fighters/women are nurturers” myth was born. It’s not a coincidence that women are finally regaining some gender parity now that we live in a technological age where size and strength are no longer critical to success.

The point of this article isn’t to argue that it’s wrong to swoon for alpha males or that housewives should be ashamed of themselves. It’s not wrong to adhere to gender norms; rather, it’s wrong to label somebody who doesn’t adhere to those norms as “unnatural.” Human gender behavior doesn’t follow a natural order. It’s wrong—ethically and scientifically—to attribute cognitive traits to an entire demographic. Our love for the romance genre tropes isn’t hardwired into us; we love them because we have learned to love them. What makes a man a manly man and a woman a good woman are things we were taught by society at large and by our smaller personal spheres of influence.

So go ahead and love your preferred Romancelandia tropes and stereotypes! But recognize them for what they are—cultural preferences, with no biological foundation.

2 thoughts on “The Biology Debate about Gender Roles: Why It Matters to Romancelandia”